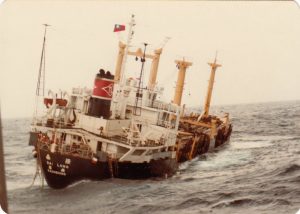 Taiwanese merchant vessel Dai Lung was sinking.  She put out an SOS.  Kirk was ISE in route to Hong Kong from Yokosuka, Japan.  OS2 Bruce Katz stopped by radio to pick up message traffic before relieving the watch.  When he arrived in CIC he plotted the LAT & LONG of the distress signal and notified the bridge that it was 90 NM north of our position.

The bridge set flight quarters and launched Sea Snake 19 to get a visual confirmation.  The seas were rough and upon return from locating the Dai Lung the LAMPS was landing on deck when the ship took a roll.  Both chocks were on but only one chain.  The helo rolled with the ship while the prop was still spinning and propeller parts were flying everywhere.  The deck was ripped to shreds and the aircraft was  out of commission.  Luckily no major injuries.  One boatswains mate was smacked in the face by part of the prop.  Rung his bell but no permanent injury.  The helo was secured on its side on the flight deck and we headed that way.

If memory serves we arrived at the scene right around dusk.  The Dai Lung was indeed sinking and all the crew were in the water.  The head count was 24.  All were retrieved safe and sound, but one who had already perished.   I don’t recall why but we stayed on station until the following morning.  Maybe to await the complete sinking.  I recall they had a load of logs, which were a hazard to our navigation.

After we departed the area, we headed to Subic, PI to turn the Dai Lung crew over to embassy officiials and get them back to their homeland. We continued on to Hong Kong

Later, the master of the Dai Lung sent us the following plaque: 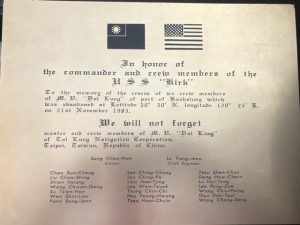